We provide holiday apartments in the popular Berlin districts Friedrichshain and Prenzlauer Berg. Our Airbnbs offer everything that you need for a comfortable stay, including towels, bedlinen, tea, coffee and basic condiments. In addition to this, all our vacation rentals are equipped with complementry WLAN. We look forward to hosting you soon. 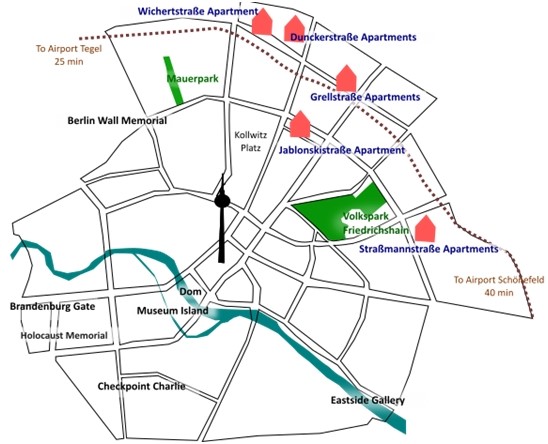 About our holiday apartments in Prenzlauer Berg and Friedrichshain

Our vacation apartments are located in the popular districts of Berlin’s Friedrichshain and Prenzlauer Berg.

All of our holiday rentals in Berlin are located in commercial spaces. We have lovingly renovated and rebuilt these business premises. Due to their location on commercial space, our holiday apartments are legal and do not take away any living space in Berlin, so you can book with us with a clear conscience and without contributing to the housing shortage in Berlin.

All of our vacation apartments have a well-equipped kitchen, a double bed of at least 160x200, a private bathroom, mostly with a shower, sometimes with a bathtub, and free WiFi. In addition, our holiday apartments have comfortable sofas so that you can relax after a long day of exploring Berlin. Unfortunately, we do not provide televisions. We therefore recommend that our guests bring a laptop with them.

Sign up to our newsletter now and receive occasional special offers and news about fun things in Berlin.